Well not exactly. The Khenpo and I. Yes. Tecnichally today is the 4th day and 30 monks is an estimate. I mean who can keep track of these guys? They are everywhere! They come. They go. They are in Puja. They are cooking. They are debating. 1 guitar? Well if you don’t count the musical contraption the Khenpo has.

I have been so lucky to spend (nearly) five days here at Nalinda or Dali Goempa as it is called both. 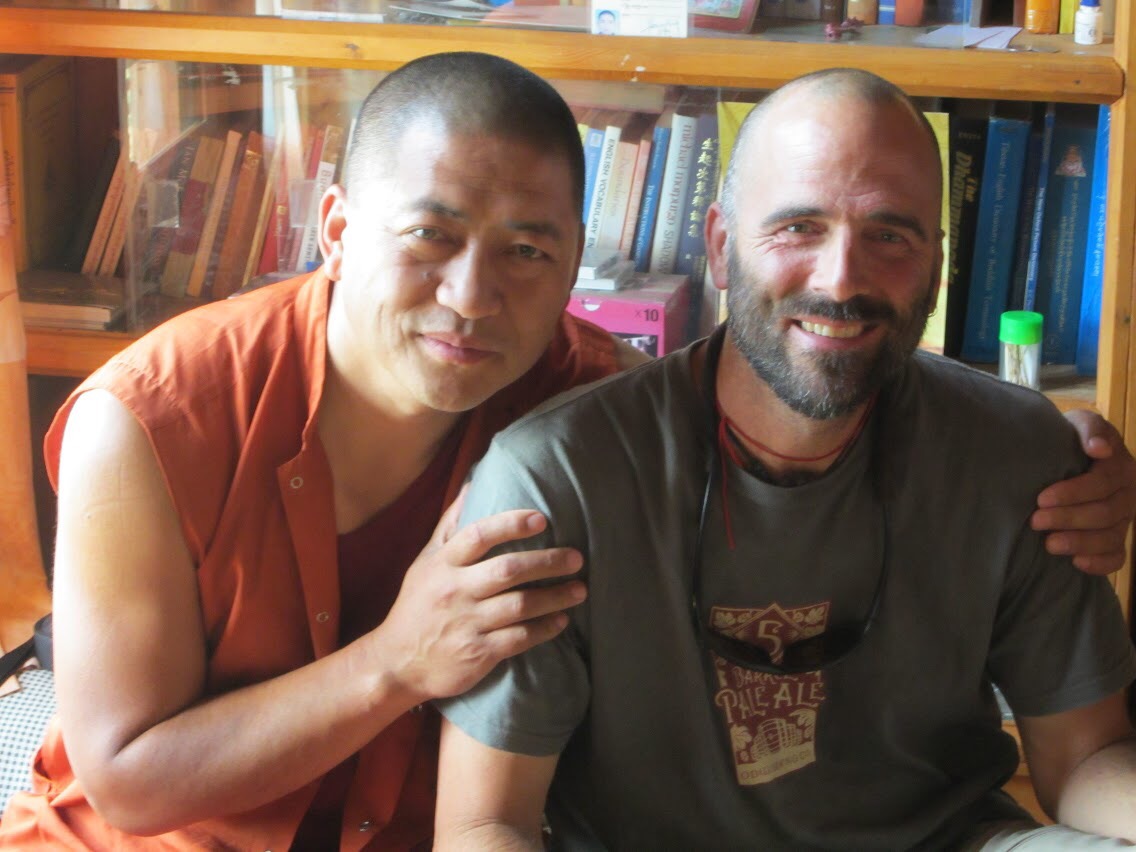 The Khenpo is a cousin to Chhimis wife Seday. While other tourists came and went, I got to sleep here. Eat here. Hike here.

The Khenpo is about my age and just such a cool guy. His English is pretty good, he is funny and quite the loving charismatic guy. We have a great connection and similar world view. And he is, well, a monk!

I also brought my guitar. I’ve never traveled here in Asia with a guitar. Now those of you that know me know I’ve been playing for a few years and by no means think I am any sort of real musician. I like playing. I can play alone. It makes me happy.

However, having a guitar at a monastery is like having beer after a hard day of construction. People think either a. You invented the beer or b. It’s the best beer they have ever tasted.

The first day the Khenpo asked me to play a song. Later that night I sat in on English class as a request. They asked me questions for 30 minutes. Then they asked me about my guitar. I begged off but the monk English teacher said he would get it and my harmonica holder from my room. Of course the first song they wanted was from One Direction. Umm. No. I don’t play that.

Finally they said “sir, can you play one more song? A sad one?” Well yes. I played The Ghost of Tom Joad. By Springsteen. One monk came up to me after and said “Sir, I felt the sadness.” Haha. No shit.

So my day began (not at my request) with the helpers making rice under my window over an open fire at 4:30 AM. The monks are performing a puja, have English class, and are super busy. Oddly the rice making is less invasive than the cacophony of dogs that sleep all day and wake up around 2 am to bark via call and response for about two hours. Like Chinese water torture, you think they have stopped, then continue again. Maybe now? No. Maybe now? No. Geez. Shut up! I nestled into my mattress on the floor (I doubled it. I’m soft) and cranked the loudest soft music I could find to attempt to drown it out. At 5 am came sleep.

For four days I was assigned a monk that basically babysat me. First came Sikkim (his nickname), an aspiring rap singer. He also made me food.

I would have breakfast with the Khenpo. The first day he mentioned about Donald Trump’s son being indicted. Since I have gone dark for almost five days (as of this draft), I still don’t know what happened and still don’t know who won the World Series!

After breakfast, first Sikkim, then Gyem, took me hiking. I donned my full trekking pack as yes I have a dream for my next country. 4 days of hiking to villages for temples, archery, and yes guitar.

Gyem had me for three days. On day two he insisted on carrying our lunch. I wanted some weight. He said bring your guitar. We hiked all the way up to a village a few hours above us. At our lunch stop he asked if I could play a song he could sing? Sure. What song? One Direction. WTF? I pulled it up on my phone to learn the chords. Imagine a monk singing about other guys wanting his girl while i butchered the chords. No, the irony was not lost on me. 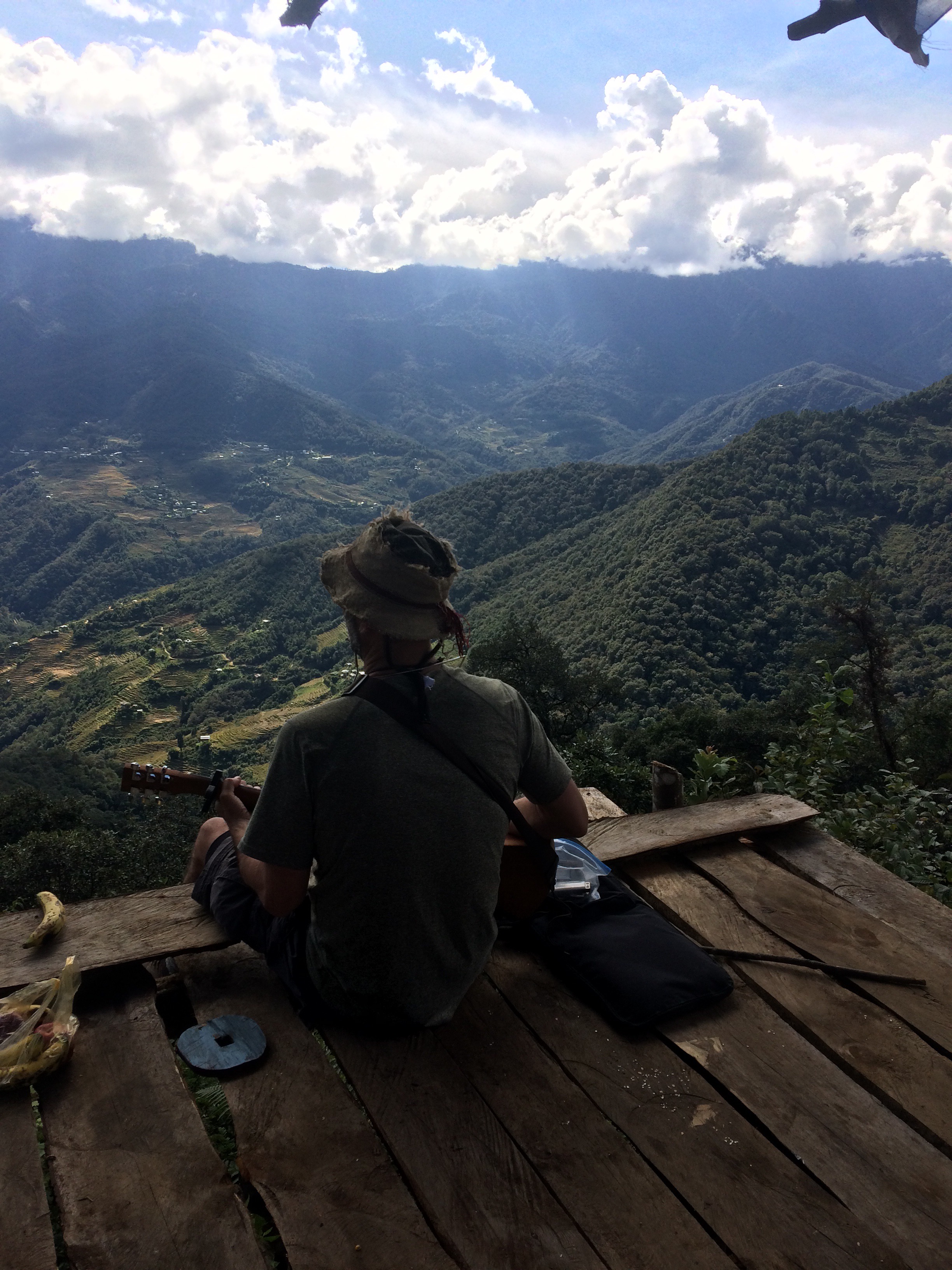 The highlight (so far) was me being invited to watch part of the puja. Chhimi suggested I bring gum for the monks. So as you see the pictures and/or video imagine me passing out gum right as they start to beat the drums just as I am bending over with the gum. It scared the shit out of me! I almost shit myself!

Every night I got to have dinner with the Khenpo and Sikkim and Gyem.

Spending time around people with unending love and kindness is quite special. Being able to connect with these folks, young and old, has been amazing. So real. So friendly. Not wanting anything but real connection. And laughs. Even the 8 year old Rinpoche, or reincarnated lama. I fell in love with his energy.

I lived pretty simply while here. Got to be outdoors. Learned so much about how they lived without focusing on their teachings per se. Got to play guitar in the afternoon while tour groups came through. You’re STAYING here? Yep.

I’m both happy and sad to leave. Knowing I really enjoyed myself and connected with these folks that do so much with so little. Time was short. Yet knowing i could never fit in in the long run.

Even if I learned a One Direction song…..