It always ends up (or starts) with this. “Amigo. Come here I have something to show you.” From all my travels (and of course grad school in Humboldt County), I am always expecting some sort of drug (usually marijuana) to be offered to me clandestinely.

Even though it’s happened many times here (meaning no drugs), I’m still surprised when it’s a cigar. “Best quality” “hand rolled by campesinos” “cheap”. It always comes to that. Irony. I don’t smoke cigars.

As I’m winding down my last days, I am chilling in a small town about 45 min outside of Viñales. Puerta Esparanza. Port Hope.

Staying at a Casa Particulares, the grandson and I have had a long conversation.

He’s manic depressive, has a young boy with his girlfriend and dammit wants to sell me cigars! Haha. I sat patiently and told him in a lengthy story I don’t smoke and don’t want to risk getting searched as I don’t know the policy of bringing Cuban cigars back in rolled up paper towels.

Since I left Trinidad, I did the long colectivo ride/switch to Viñales. A gorgeous gringo town that I stupidly almost avoided. I shared the colectivo with two young Dutch gals “on holiday” that spoke little Spanish and an English/Canadian from Vancouver about my age with a sad story who was going thru his mid life crisis. His Spanish was bad too. But he had been here before.

Ignoring my bad history with motorcycle rentals in foreign countries, I opted to be social and rent scooters with them after we arrived. Bad idea. So lucky it wasn’t worse!

We had one fun night on the town before they moved on and I snuck off to eco-groovy Las Terrazas for an amazing zip line canopy trip.

The bar/disco was closed that night as the country is in mourning over the plane crash. I stood outside and watched a large group of university students camping there amuse themselves with a game of “Ha-Hey-Ho”. I played once. Didn’t win.

I did start talking to this student that had spent two months in India. So you can imagine my giddiness at discussing Buddhism and quantum physics with him in English. Fascinating as he knew about quantum physics but little about Buddhism. We connected.

Back to Viñales. Dining solo. Watching the Cavs online. Feeling not really in Cuba. Maybe Thailand or Mexico. 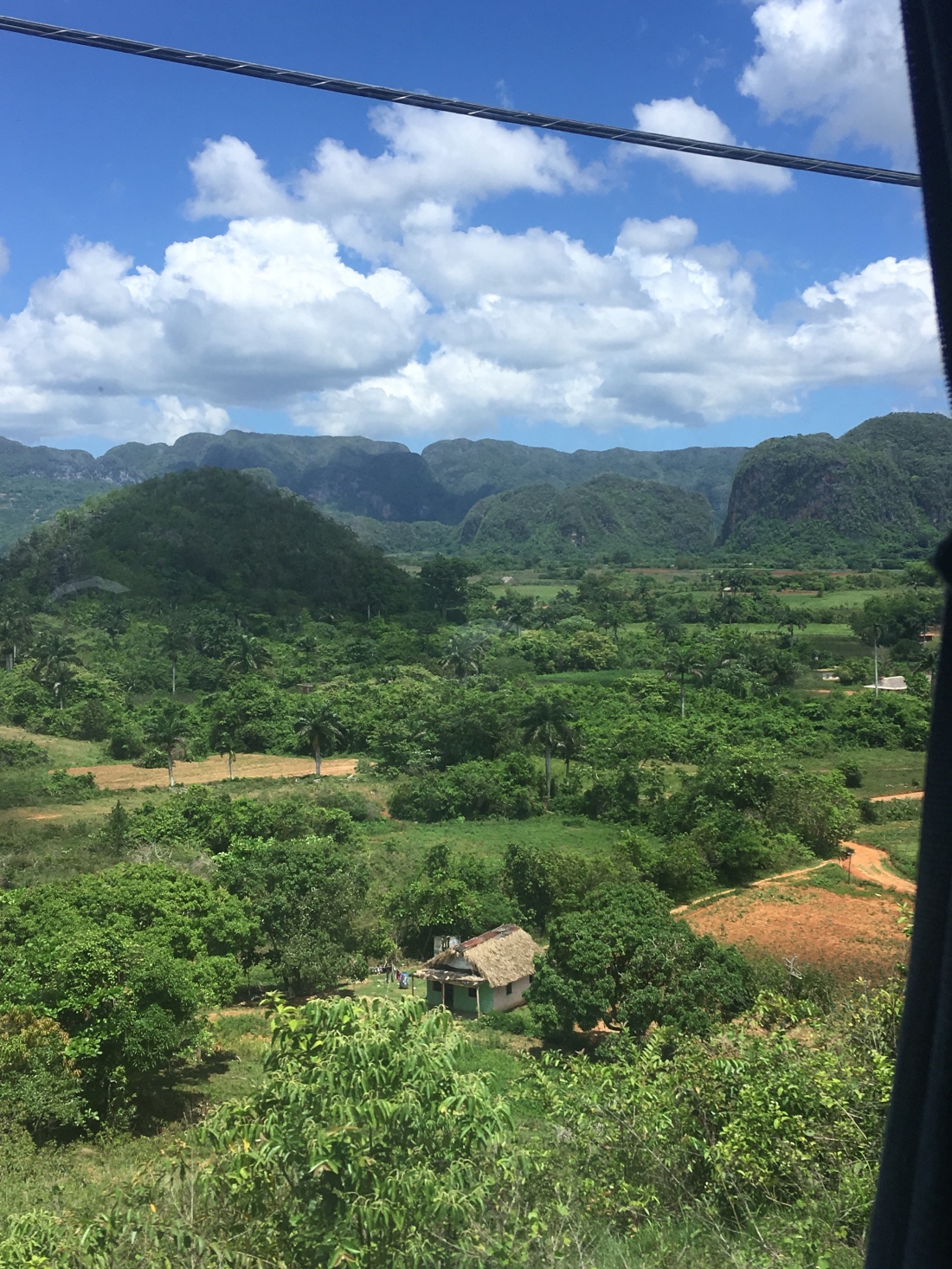 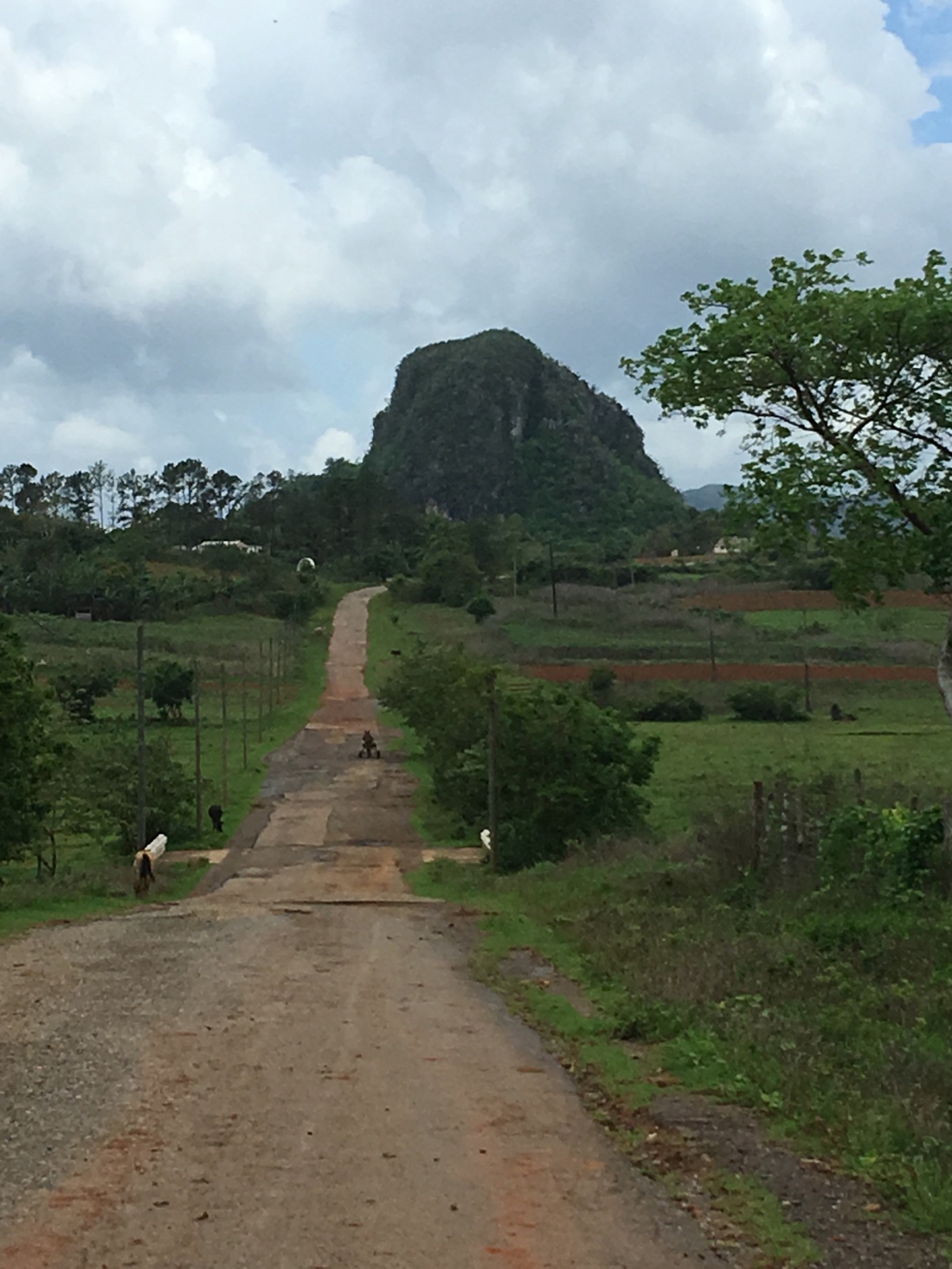 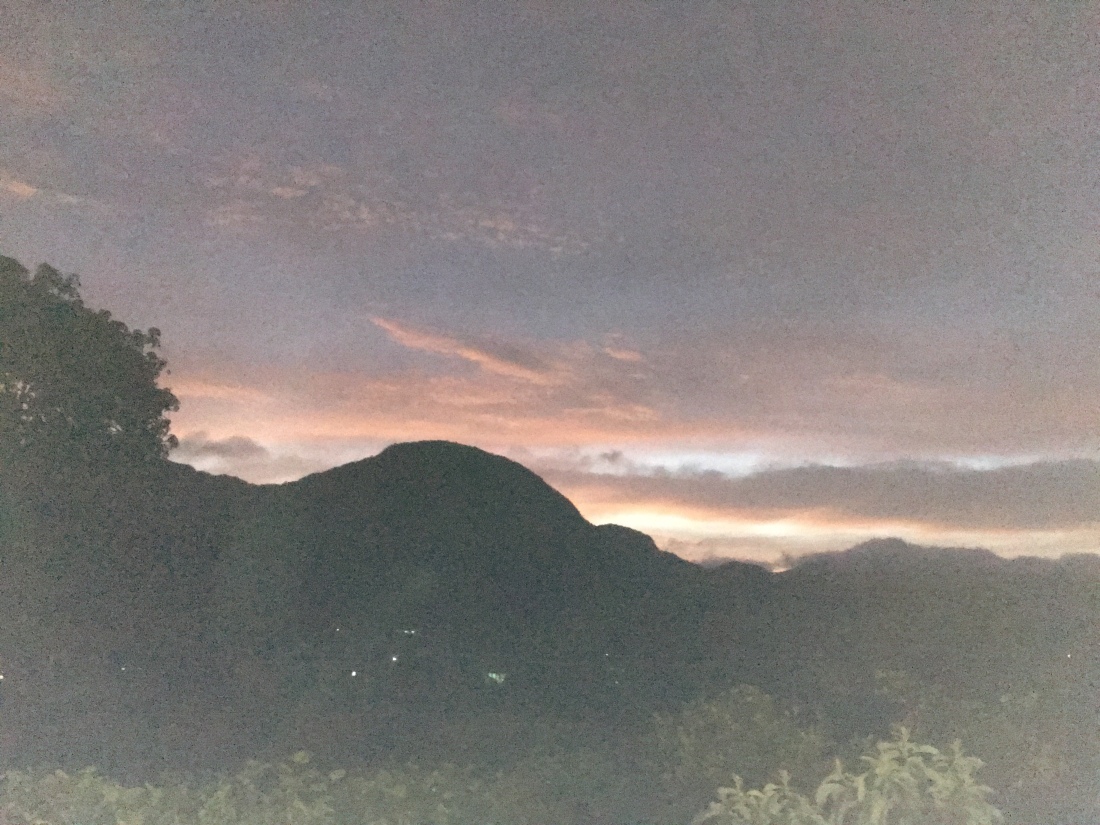 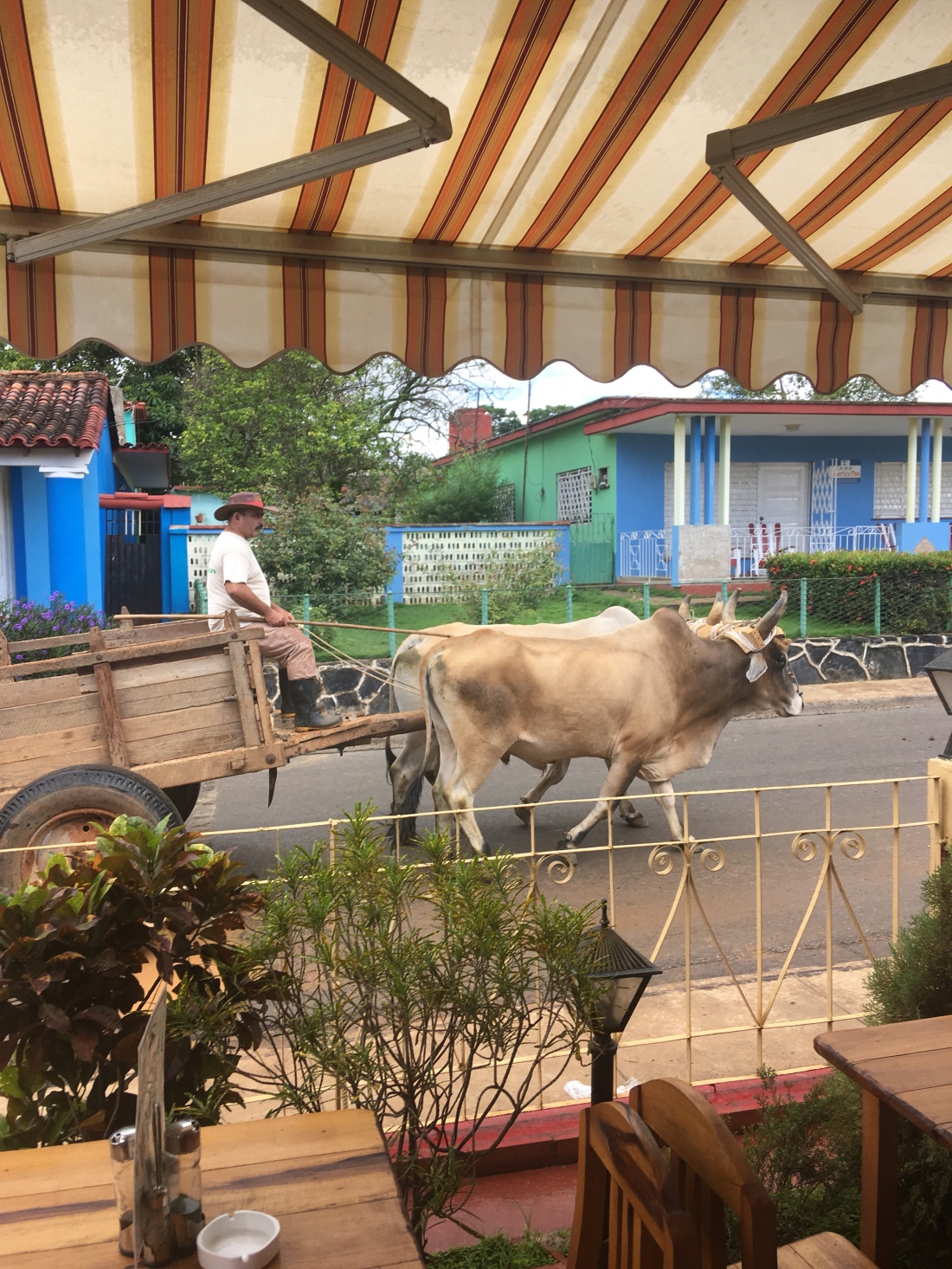 As you’ve probably heard, the old cars here are amazing. Fun to ride in. Sometimes hard to open the door (and window) from the inside. Usually new non-American motors. It seems no one turns their cars off while waiting. For anything. For any amount of time. I know some have a hard time starting but geez. 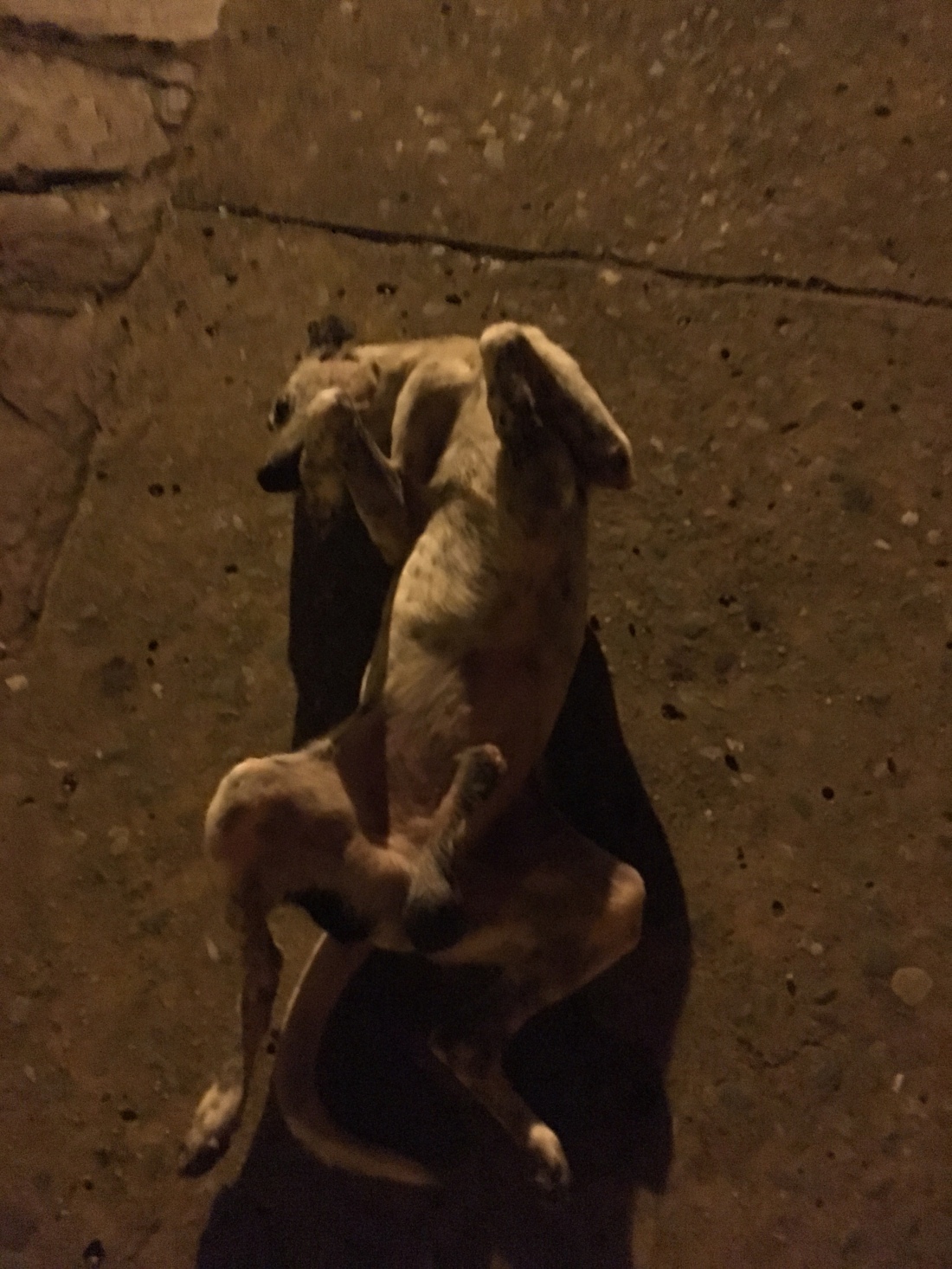 They sell Wi-Fi cards for a $1 an hour so that creates a digital divide. Yet it creates another reason to congregate in the central parks. Normally the only place with a signal.

So I wouldn’t travel solo here again unless I was better at Spanish and maybe in January or February. It’s exhausting. And hot and buggy. Although me and the manic depressive dude had quite the long chat. I also talked at length with his aunt right when I arrived. She was suffering from unexplained body pain since her son was killed. I explained in Spanish how to meditate (after we discussed her diet) and she agreed to try 3 minutes of breathing in the morning. 🙏🏼

The reason to come here is to connect with the people. They are really cool and engaging. They speak Spanish like they do in Nicaragua. La gente come sus letras. They eat their letters. “Buen día” “un, do tre”. Basically dropping the s or really just the last letter of the word. Like us saying goin’ or comin’ or how ya doin’. Makes it harder for sure. I really only spoke English three times. A Dutch couple early on, the aforementioned colectivo crew, the one-off Cuban that could speak it and a 71 year old Canadian in Holguin that was traveling with his 22 yr hooker (who had his name tattooed, in cursive, on her Cuban back), a bag of viagra, and a plan to adopt a pregnant woman’s baby (well actually claim it as his) so he can live there full-time. True story. That will keep me from just asking “hey do you speak English?” when I’m sitting alone at a restaurant!

Food is way better than people say. Slightly bland. But I’m easy. I like the beer and rum.

I will say one thing, if they ever open up trade completely to the US, invest in nails. And I don’t mean the kind that builds houses.

For a country that is super poor, it’s seems as though the number one consumer good is fake fingernails on women. In fact, if you see one without them you are shocked. All kinds. All colors. Metal inserts of some kind. Long. Like really long. Every finger a different color. Toenails too. It’s really quite astonishing. It’s a big Latin American thing. But seriously. ALMOST EVERY WOMAN. Young. Old. I’m not sure what age they start. Or stop. But it’s ubiquitous. Haven’t heard that in awhile eh?

The dudes are pretty macho. Honking horns at every gal. Saying “you’re beautiful” or “want a ride?” Waving. It’s like “Happy Days” in Spanish! The cars add to the old timey aura. Not one hint of aggression though. And maybe the odd head shaking at bad driving.

It seems many don’t take marriage seriously as most talk of sex with other women. Like immediately without prompting. But the families together seem close and fun. And it could be just the dudes that interact with tourism.

As I said before, they all come in different shapes, sizes and colors. It seems the black folks are integrated with the whiter folks. Poverty has strange bedfellows eh?

As everywhere the kids are adorable and easy to connect with. They just want you to listen.

The homes are pretty dilapidated on the outside but the Casa Particulares are decent and sometimes nice inside. If only they had more paint delivery…

T hey don’t talk politics here and although they loved Obama, I actually found one guy that liked Trump. He was drunk.

Viñales is like a traveler’s ghetto. A smaller and nicer Khao San Road in Thailand or Thamel in Kathmandu. 15 bucks a night. Good food. Always a place for a beer. Stunning limestone mountains. Farms. Horses. Motos. Music. Doesn’t feel like Cuba as I said. But visit here and try and sneak into the margins. Or away from the chaos. You’ll love it. No one offers you drugs. It’s safe. My taxi driver told me today that if you mess with a tourist, they kill you. Whoa.

And of course it rains here.

This trip was shorter and of course way less emotional and less physically demanding than Asia. But certainly less predictable and I used my share of Gold Bond. I feel safe here. Of course I had my six hours of cultural interaction daily. Museums, churches, folk demonstrations. Coffee and tobacco farm tours.

No drugs anywhere. But man, don’t get caught (especially early in the day) in a conversation with a drunk here. Painful.

The life is slow here. Tranquilo. Folks would just invite me on their porch for coffee as I walk thru town. Chat in Spanish. Sometimes it takes til the end of your trip to get what you want. When you slow down.

I’m really not sure how the people interact socially. It seems it’s their choice to meet, have a family, and of course figure out a way to thrive and show SOME individualism. Whether it’s your car, your music, your hair (for the younger folks) or, of course, your nails.

And people rarely move away to the city like other developing countries.

But it’s only a small sample size for me.

Open trade and investment here will both help the place and wreck it. Can’t ship much here except thru the US. Its a big place. It’s cool. Take your time. Find the hidden gems.

But be careful on the motos!

On my way back to Havana today then the long slog home. Of course I saved the best for last. I’m just cruising thru the streets yesterday, avoiding the drunks that engage me. I came across a guy on his porch and rocking chair. “Que país?” He asks me.

I sit. He offers me coffee. Our talk turns into him asking me if I want to catch crab with his family when his boys get home from school. Sure!

The crabs have one big claw and live in holes (Cuevas). He said go get long pants and shirt. Why? Mosquitos. But it’s daytime!

Holy shit. Watching the boys catch crabs. Collecting mangoes. Carrying the youngest boy on my shoulders. 4 hours later and me lugging first 30 lbs of crab then 50-60 lbs of mangoes on my shoulders. Hard work. Carried them for over 90 min. Mosquito food I was. Good fun. Deep into the local life. It was his day off. The dogs came with us and would catch crab!

A quick shower then back to his house. Yummy crab extravanganza. Rum.

Guitar with his cousin

Rocking chair on the porch. 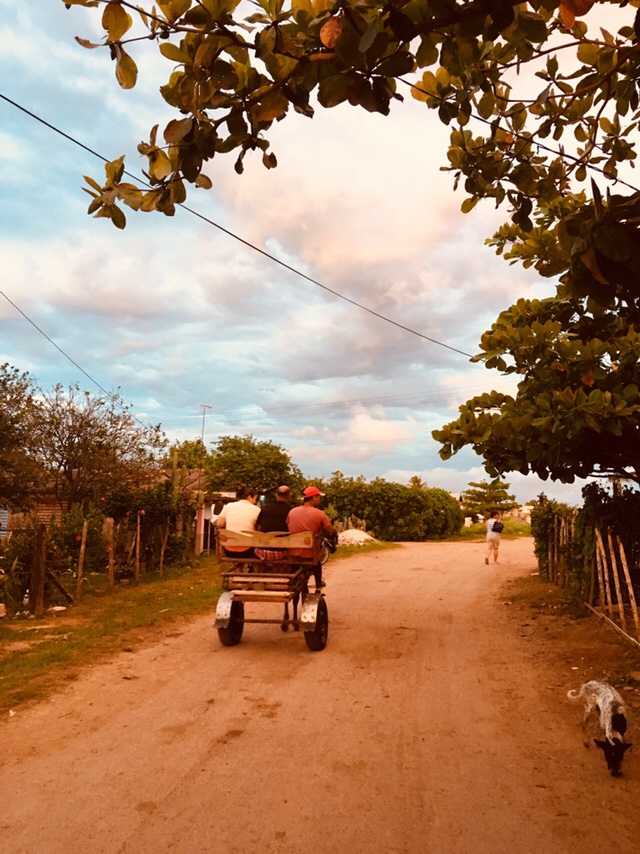 He gave me his favorite Che Guavera momento he’s had for ten years!!!

I gave him my second earring as he had a hole but nothing to put in it that was like mine.

We chatted til 9:30 on the porch with his wife and boys. Dogs sitting there.

Right out of a Steinbeck novel. There are trade offs for sure. Notice the youngest in the window pretending to play guitar.

Yeah! Loved my last night en el campo. How the hell does that happen? You ever ask some random dude walking the streets to spend the whole day and dinner with your family? And he can’t really speak your language?

Exactly. My heart is warm. I gotta go home. It’s taken me some time to understand the culture here. But I do love it. It grows on you.

They’re poor. But they got it right!

And my ride from Viñales to Havana today. The driver was a cross between Michael Franti (sans dreads) and Ricky Ricardo. Hilarious.

Talking to the Spanish couple and this angry exchange on the phone with another taxi driver doesn’t do his personality justice. But you get the idea!

Back in the same room from my first night in Havana. What the hell just happened!

2 thoughts on “Cuba. The long story (and this one is really long). Sorry.”