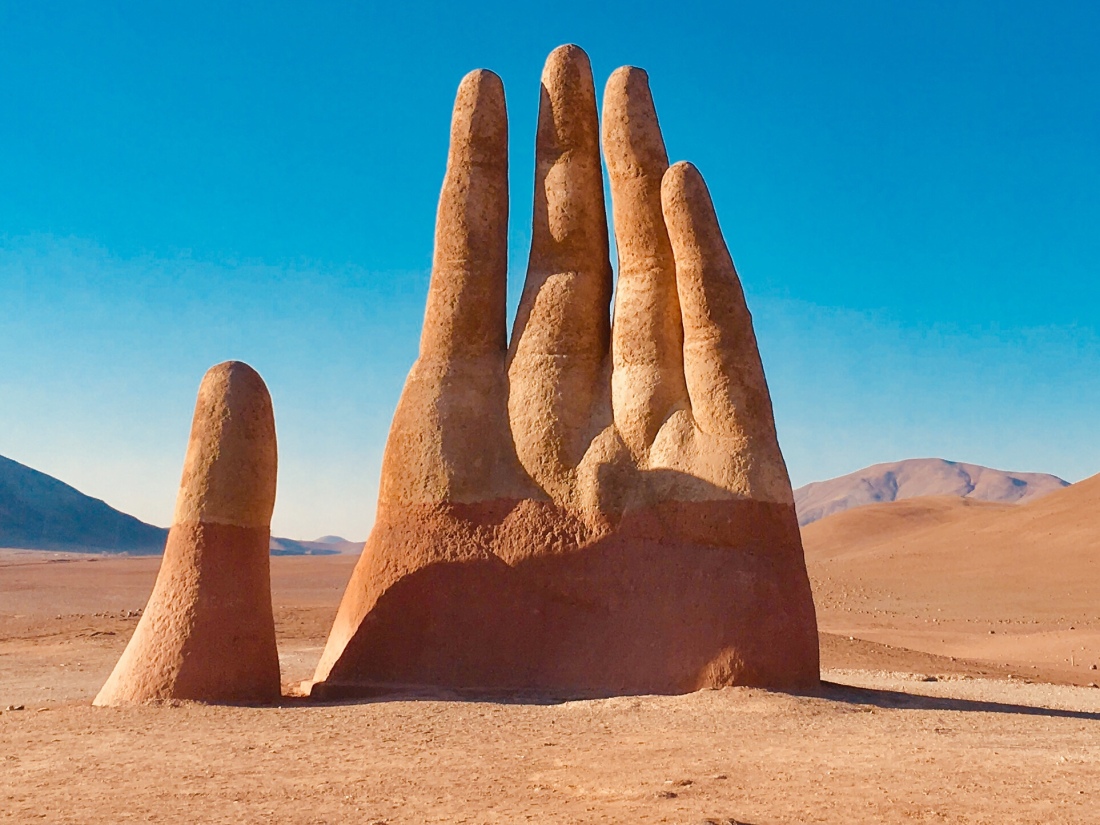 When in southern Peru in late 2001, I dreamed of traveling the Atacama Desert; the driest non-polar region on earth. I never dreamed I could take my own rig since in 2001 I was hitch hiking there. I stared down the coast before I made my way up to Arequipa and Cusco. I wanna be there!

The Atacama (depending on who you talk to) spans a massive coastal part of northern Chile (and to some it just sneaks over the border to Peru). It is a stunningly desolate place of constrasting landscapes. It’s Baja meets Death Valley meets the Mojave meets Argentina. At certain points, you leave the coast and drive straight up over 6000 feet to in just 20-30 miles! Then wind thru the high desert for hundreds of miles until you plunge back to the coast. And there lies either a tiny fishing village or a 200,000 person cosmopolitan city, flush with casinos and clubs and duty free ports. In the middle of nowhere.

To give you an idea of distance, me leaving southern Tierra del Fuego and heading north to Arica (the northernmost coastal Chilean town), would be like leaving Prince Rupert BC and driving to Oaxaca, Mexico! But it blows your mind that you are driving NORTH and its getting warmer.

After Pascalle left from Puerto Varas to head north, I settled into the van. Solo. Other than a few days in Tierra del Fuego and a few days on the ferry, I had been traveling with people in my van for a solid two and a half months! I needed Bob time. Unfortunately, Puerto Varas to Arica is a pretty stiff drive. So my time was spent behind the wheel, rocketing north and wild camping wherever I found a spot.

The drive is spectacular; especially north of La Serena. I could spend a year just hiking and fishing that region. The colors, the sea, the mountains, the desert. And you are mostly alone. Except for the odd park ranger or drunk campground host. Very safe. Very tranquil. I would use my Spanish with the guys pumping gas as they loved my van. At times the odd local would chat me up and give me tips. But for the most part I flew under the radar except for the gawking at my van.

As you get north, the people seem a bit more friendly if not standoffish. After five to six long days of driving, fixing a flat tire and getting stuck here or there, I settled into Iquique for 4 days of hostel life. The owner let me park my van on the street, pay for a dorm bed (ten bucks) and use the place. But I slept in the van on the street. Nice. A few days of working out, playing guitar, practicing Spanish, and eating right. Shower. Nice. Recharged.

The things that matter the most to me as I am rolling along is to connect with people when I can. Especially locals. But it is hard. You need a reason other than food and shelter. A coffee shop? No. Hostels? Rarely. So you rely on the rare circumstance that brings you together. If even for a moment. And if they speak normal, somewhat slow Spanish? My heart explodes! I have given up getting better this trip at Spanish. The only way for me to get better is two solid months. Immersed. No travel. No work. No guitar. No hiking. Just Spanish. Stay tuned.

As I drove slowly north and finally got to see the main Andean range, the big mountains, I started getting excited. I finally get to get up to the Altiplano and explore indigenous communities and remote regions in my van. Back to hiking. Cold nights. Warm days. Volcanos. Hot springs. Wandering. I dreamt of this part while in Bolivia five years ago. Its a special place. And I’m going back. Bolivia. The only place in South America that reminds me of Nepal. The pictures hopefully will do it justice and hopefully I can get out there and interact. It is one drawback of the van. Local interaction is enhanced with buses and tours. But you can’t have it all.

One thought on “Northern Chile: The Atacama Desert”